I am the artist Chelsea Smith. I work exclusively in copper plate etching printmaking using only renaissance era tools and techniques. All my works are hand colored inks transferred from etched copper plates during a manual printing process. There is no post pressing coloring done, ever! Please check out my shop.

Copper plate Etching Printmaking Fine Artist Chelsea Smith was born in Casselberry Florida in 1992 and grew up living between Casselberry Florida staying summers in Nottingham England and Derry Northern Ireland. She is a Fine Arts Graduate of the University of Central Florida. She leverages renaissance era techniques and materials within neoclassical art to produce original fine art. At a time when contemporary art is beholding a robust and thriving center stage within the art world, it is the renaissance inspired artist that provides the opportunity of a unique viewer experience.

Chelsea Smith is a modern woman rooted in another time.

When talking about her passion, her art, she drops references to the old masters, Celtic mythology, and antique printing presses.

Chelsea, 29, is an artist who creates prints from copper plate etchings, a Renaissance-era printmaking medium used by her favorite classical artists, such as Rembrandt and Albrecht Dürer. Her artwork combines interests in animals, nature, mythology, and history.

“I’ve always been fascinated by history,” the Casselberry resident says. “It’s a way for me to look at historical context and my inspirations, artists from the 1500s and 1600s. It’s fascinating to learn about history and the details of it and bring it back in a fresh new way in the 21st century.”

What was once old is new again, as Chelsea is finding success in the 21st century with her 500-year-old technique. One of her mythological representations, “Cernunnos,” was chosen as the poster art for the 42nd annual Mount Dora Arts Festival in February. The print depicts an Irish elk with birds sitting on its large antlers. “It’s like a male version of Mother Nature,” she says.

A selection committee chose “Cernunnos” from among the work of 400 artists at the 2016 festival.

“It was a huge honor,” Chelsea says.

That’s one in a string of accomplishments as Chelsea hustles to expand her reach in the art world from her home studio. She travels to nationally rated art festivals throughout Florida, the Southeast and East Coast, while winning several awards, sells her etching prints at etsy.com, displays artwork at Universal Orlando’s Islands of Adventure localARTicles Boutique, and looks forward to a showing this year at Orlando City Hall’s Terrace Gallery.

Steve Bowersock, a Mount Dora snowbird and former board member for the Mount Dora Center for the Arts, saw Chelsea’s work at that 2016 festival. He now represents her in the large New England market, displaying several of her etchings at Bowersock Gallery in Provincetown, Massachusetts, the oldest continuous art colony in the country.

Steve says he doesn’t often represent artists so young, but he was struck by Chelsea’s distinctive style.

“It looks whimsical at first, but when you look at her body of work as a whole, she’s using symbols to create a deeper story,” he says.

She has a “clear vision” in her work despite using an archaic medium, he adds. “She brings a young, contemporary flair to a medium that’s old school. It’s a powerful medium but not as popular.”

The Central Florida native actually is an old pro. She began with pencil art at age 12, sketching portraits of pets to raise money and awareness for pet rescue centers, but her career path appeared inevitable long before then. (For More Information visit PetSketch.Art)

She met singer Adam Ant at a show, and he was later interviewed for a TV show on OWN with Chelsea’s drawing of his dog sitting on a shelf in the background. She also did a portrait of the Obamas’ dog, Bo, and received a thank-you letter from the president.

“There are pictures of me, before I could walk, at 2 years old drawing for hours and hours. It’s what I’ve been doing my whole life,” Chelsea says. “Everyone else was playing, and I was drawing—drawing on walls, anywhere.” 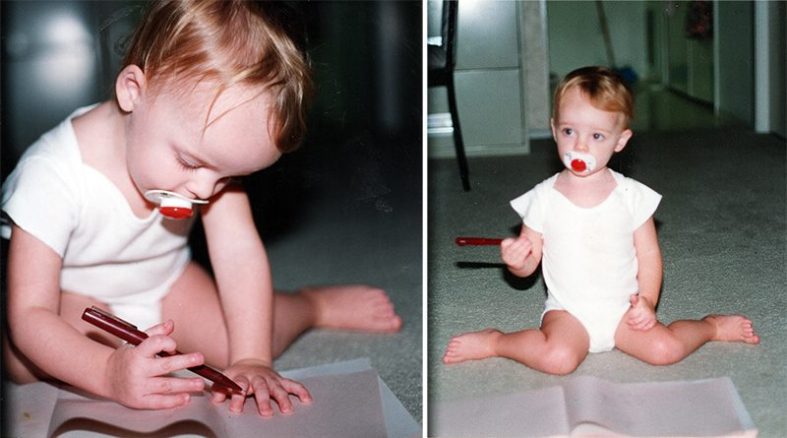 With her pet portraits, she became a kind of “artist to the stars” by contacting musicians and actors and presenting them with sketches of their pets or other prints. Owners of her work include artist Peter Max, actors John Cusack and Dichen Lachman, musicians Rob Thomas, Adam Ant and Johnny Marr, and members of Duran Duran, The Fixx, Boy George and Goo Goo Dolls.

Her interests shifted while studying at Seminole State College, where she “fell in love” with copper etching because “it combined all the techniques I like in pencil art and the love I have for detail.” She went on to complete her bachelor of fine arts degree at the University of Central Florida.

The printmaking process starts with her drawings. Then she etches the design with a metal needle onto a copper plate coated with a waxy, acid-resistant substance, exposing the bare copper. The plate is dipped in and out of an acid solution of ferric chloride and citric powder, which eats into the metal and reveals the lines and details of the design. The plate is washed off and inked in the colors of her choice, and the image is transferred onto paper using a printing press.

“I wanted to continue that tradition,” Chelsea says, adding that the medium is increasingly rare because many artists prefer to use modern technology.

In addition, printing presses often can only be found at secondhand stores or antique shops, and some weigh 800 to 1,000 pounds, making them cumbersome. And some of the chemicals used are a little risky because of the fumes they generate, so Chelsea keeps her workspace well-ventilated, wears protective glasses and gloves, and is careful not to sip a liquid from the wrong glass, she jokes.

Chelsea’s two primary artistic themes, mythology and the Sacred Feminine, blend old and modern views. Her family hails from England and Ireland, inspiring her interest in Celtic mythology. Some of her images include “Bloduewedd,” a symbol of flowers and owls; “Artio,” a bear goddess; “Flidais,” a shape-shifting “lady of the forest” and “Earth Mother”; and “Rhiannon,” as in the Fleetwood Mac song, a character from Welsh mythology.

The Scared Feminine is a philosophy emphasizing femininity and divinity. Her work often focuses on women’s anatomy, such as Mother Earth or her etching, “The Third Eye,” of a woman with kaleidoscopic patterns emanating from her “third eye,” representing intuition.

“Women artists back then (during the Renaissance) couldn’t do anatomy, female forms,” she says. “I’m a woman artist doing women figures.”

Along with the feminine images, she uses symbols of the transience of life and inevitability of death.

“It sounds like it might be darker, but it’s based on an old Renaissance technique called vanitas,” Chelsea says, referring to a genre associated with Dutch still-life paintings of the 16th and 17th centuries. “I’m kind of doing a spin on that.”

Those are heady themes from the past being explored by a modern woman. In the future, she wants to continue to expand her horizons with more festivals and gallery showings. In the present, she simply is realizing her dream to be an artist.

I do Gallery Exhibitions and Events
Please Contact below for more details & booking!

I hand draw fine art pet portraits of your pet based on your own favorite photograph! Once you have the perfect photo of your pet, I use graphite pencils to create your portrait I donate 10% of all proceeds to Pet Rescue by Judy, or the 501(c) pet rescue of your choice! I have created original Celebrity pet sketches for those generous folks with Foundation donations. All pet sketches are 11″x 14″ original graphite sketches on white archival paper, matted to 16″x 20″. Single Pets $125,  Two Pets are $195 For more information visit PetSketch.Art